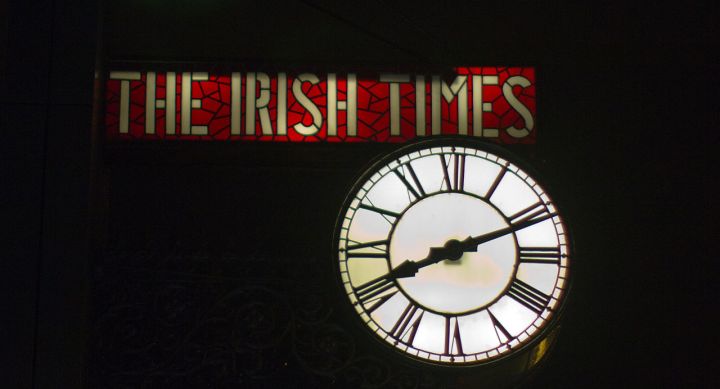 Two items of interest were published in today’s Irish Times. The first, a letter from Academics for Palestine, concerning the ‘International Law and the State of Israel: Legitimacy, Responsibility and Exceptionalism’ conference due to take place in Cork University which is now under threat from outside forces.

Sir, – Academics for Palestine, a group of academics working in Ireland in support of Palestinian universities and academics, notes with the greatest concern reported attempts by the Israeli embassy to prevent University College Cork hosting the conference “International Law and the State of Israel: Legitimacy, Responsibility and Exceptionalism” (“UCC conference on Israel sparks row with Israeli embassy”, January 10th).

The conference is being jointly organised by Palestinian and Israeli academics and offers a vital examination of how Israel operates, particularly in relation to international law.

The conference was scheduled to be held in the UK in 2015 but was thwarted following a high-profile campaign by the pro-Israel lobby that branded the event as “legitimising anti-Semitism” and pulled by Southampton University, citing security reasons.

Behind the effort to jeopardise the conference is the Israeli government and its multimillion battle against what it calls “delegitimisation”. A new ministry was set up as part of the effort.

Delegitimisation is considered any effort to raise awareness of the plight of the Palestinian people, criticising Israel’s policies and actions, and calling for accountability for Israel’s breaches of international law.

A recent Al Jazeera investigation has exposed interference by the Israeli embassy in internal British politics and universities, including planning to “take down” a senior member of the government, ousting the leader of the National Union of Students, and demonising advocates of the Boycott, Divestment and Sanctions (BDS) campaign.

It comes as no surprise that similar attempts are being made in Ireland to shut down spaces for debate and attack the work of advocacy groups such as the Ireland Palestine Solidarity Campaign and Trade Union Friends of Palestine that had their bank accounts closed in the past year without adequate explanation.

A cornerstone of our democracy is freedom of speech. In the interests of academic freedom, open debate and indeed justice, it is crucial that this conference goes ahead as planned without interference. – Yours, etc,

The second is an Opinion piece by Dr. John Reynolds of Maynooth University, who writes in strident defence of academic freedom and the right to ask awkward questions of Israel, and every other state. The piece can be read online here ‘Questioning the state of Israel is not anti-Semitic’, and below is an excerpt.

The legacies and structures of Israel’s founding dispossession can be no more immune from analysis than those of the extermination and enslavement upon which the United States was built, the forced labour and patriarchy which underpin several Gulf monarchies, or any other forms of institutional discrimination. Scholarly analysis of state structures that constitutionally privilege one particular group of citizens over another is far from equivalent to inciting hatred against individuals or communities on the basis of their group membership.”